The Paul Bernon Memorial Prize is awarded to the graduating senior most outstanding in anthropology and sociology. Selection is made by department faculty.

This award is given to a senior A&S major or minor selected by department faculty for outstanding service and/or scholarship aimed at enhancing transnational and intercultural understanding. This departmental award is in memory of Carolyn Byington ’15, a double A&S/IA major passionate about responsible global citizenship.

This award is given to a senior A&S major selected by A&S majors and minors in recognition of their significant engagement in the A&S Department and Lafayette campus and their leadership in promoting the welfare of others. This award is in memory of Amanda Miner ’18, an A&S major with a contagious love of learning about the world, exploring community, and fostering positive change through anthropology and sociology.

Under the guidance of a faculty member, an A&S major writes a thesis based on an approved project in a specialized field of anthropology or sociology. If at the first semester’s end the project has honors potential, the student applies to continue toward graduation with honors. After completing the thesis, the student takes an oral examination on it and its field. For more details, see http://anthrosoc.lafayette.edu/honors-thesis/ 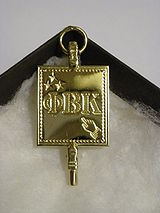 Outstanding students from all curricula are eligible for election to Phi Beta Kappa in either the junior or senior year. Membership criteria are established by the local chapter, not by the College. In addition to meeting the requirements of their degree programs, students should demonstrate breadth in their coursework and a commitment to liberal learning. More specifically, the chapter takes into account grade point average, advanced-level courses outside the student’s major, and the study of mathematics and foreign language. Admission to Phi Beta Kappa is always at the discretion of the chapter, and membership is gained only by election.